Our eleventh stop for the HOKA ONE ONE Top Trails video series is Bellingham, Washington. HOKA Athlete Jeremy Wolf takes us on a run on the Interurban Trail; a flat old trail that leads into the mountains. Host Matt Barnhart meets up with Polly Favinger (Fairhaven Runners) to discuss Bellingham’s running community, where even elementary school children have a trail running program. Matt and Co-Host Ian Turpin then meet up with the President of Cascade Mountain Runners, Dan Probst, at Kulshan Brewing to discuss the creation of the Bellingham Mount Baker Trail run.

Want a closer look at the shoe Jeremy wears on the trails? Check out the Speed Instinct.

Our tenth stop for the HOKA ONE ONE Top Trails video series is Salt Lake Valley. HOKA Athlete Karl Meltzer takes us on a run on the Alta-Brighton Trail; a high altitude, single track, wild flower run in Little Cottonwood Canyon. Known as the Speedgoat for his long-distance feats, Karl shares his wisdom on what it takes to run a 100 mile race. Host Matt Barnhart then meets up with Darrell Phippen (Manager, Wasatch Running Center) where they discuss the multitude of trail options in the Salt Lake Valley. Next Matt meets up with Jim Skaggs (Happy Utah Mountain Runners) who shows off Wheeler Creek Trail in Ogden Canyon.

Check out the HOKA shoes named after Karl, the Speedgoat.

HOKA Athlete Mike Wardian has officially set the world record for fastest average pace running the marathon majors in a single year. His average time was just under 2 hours and 31 minutes.

Of course, we were impressed by his record, but we also knew he was full of stories from his travels to six different marathons all around the world. Here are Mike’s favorite moments from his journey.

“The memory for Tokyo that sticks out to me is going to the start line in such an orderly fashion. There were so many Japanese Volunteers to show you where to go and not go and you had to stay in your assigned location. It was all so calm and tame I didn’t even realize the race had started. I was in the 2nd group and had to wait more than a minute to cross the start line by shuffling.” 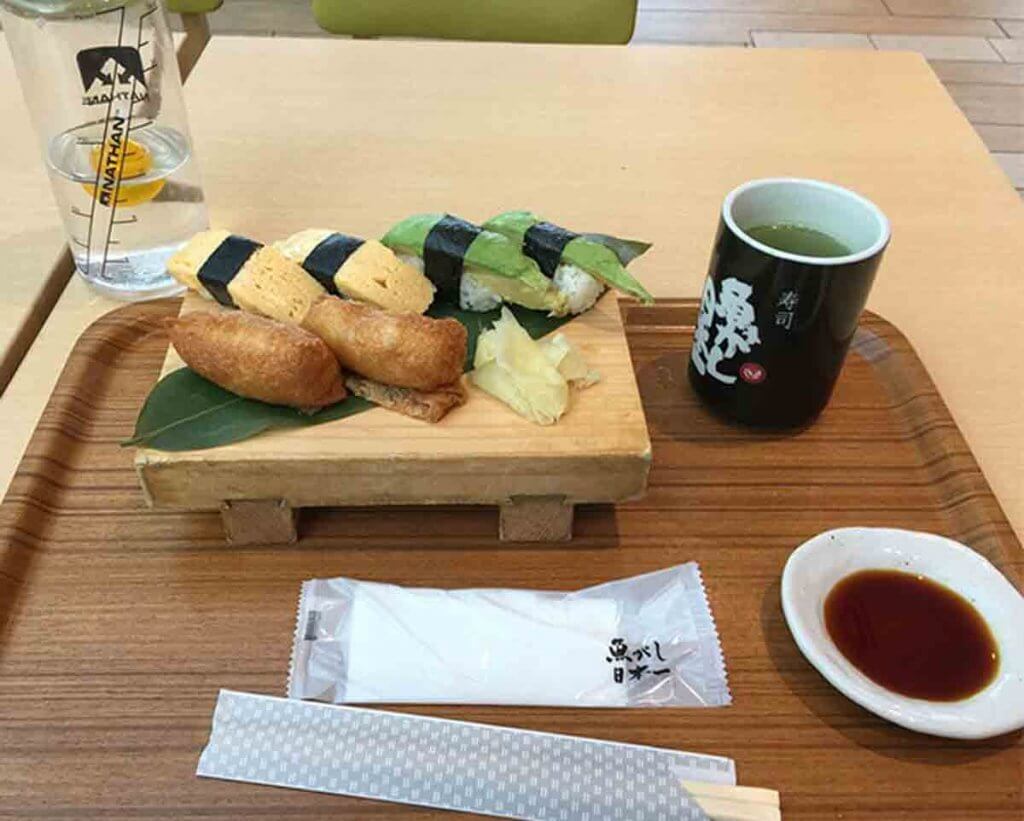 “Boston is the marathon that got me into running. I did a blindfolded 5K for ‘Team with a Vision’ that weekend. It was definitely a highlight. Another was some kayaking with our boys in Concord the day before the race. I also remember at Mile 21 of the Boston Marathon getting some water from Pierce and Grant.” 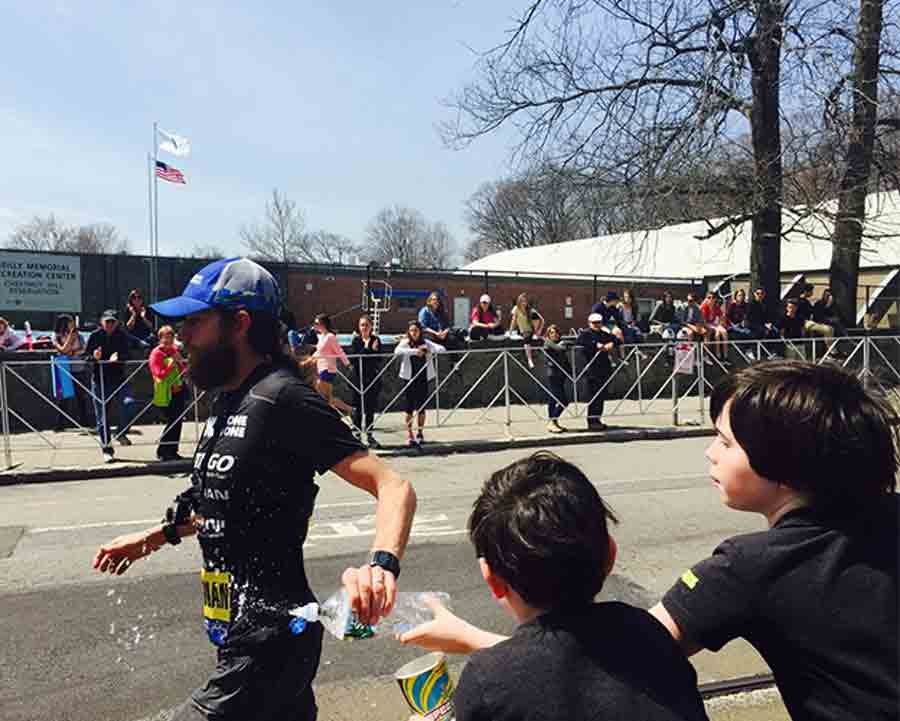 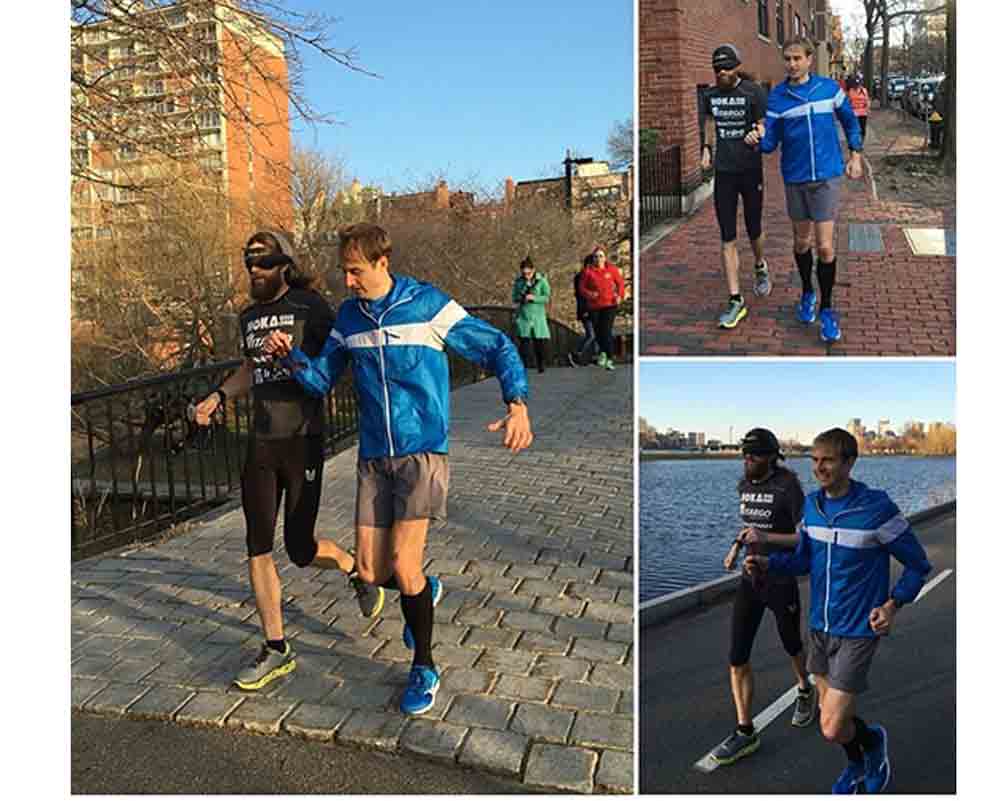 “I was really nervous about the London Marathon as it took years to get into and it was also only 6 days after the Boston Marathon. I had heard that they are super strict regarding ‘vests’, or singlets, so I had to scramble to get a ‘vest’ at last minute and almost missed the start of the race. Then I had a super tight flight out within 2 hours of finishing the race. I had to go right to airport without showering, which turned out great because I meet up with a new friend that works at the White House.” 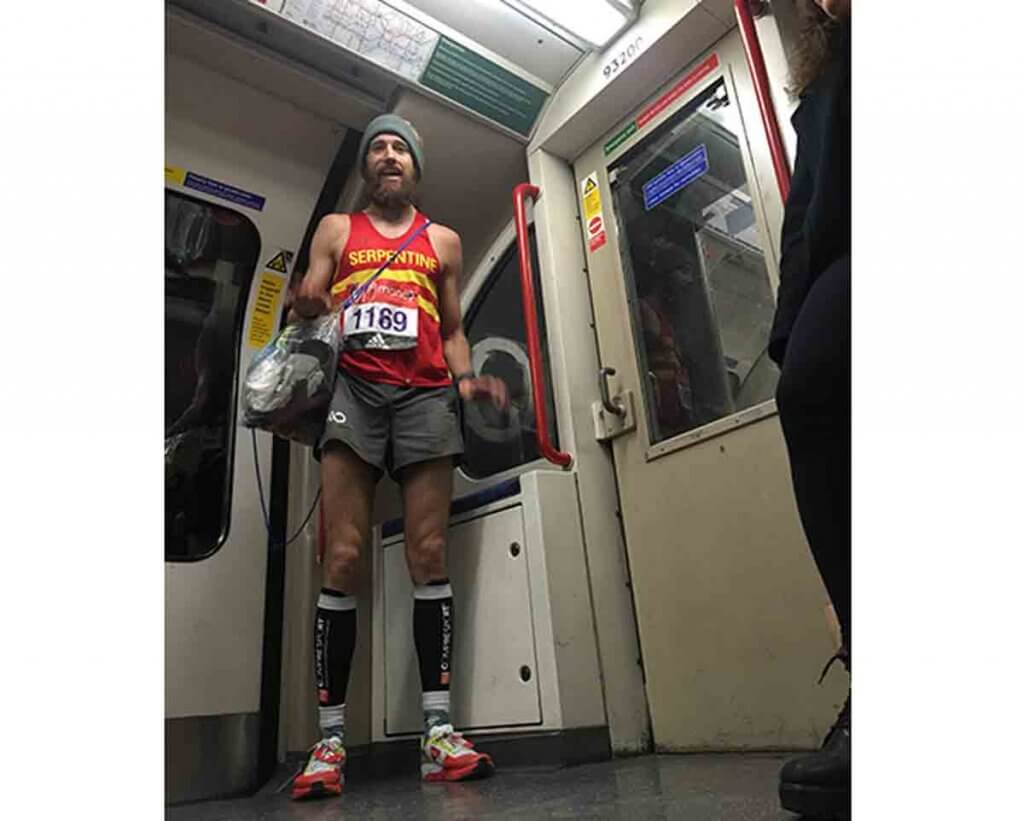 “The Berlin Marathon was only a few weeks after the Ultra Trail du Mont Blanc where I had run for 28 hours, so I was really interested to see how my body would hold up. I was traveling without the family, so I decided to put out on social media that I was looking for a place to stay. I ended up sleeping on this cool guy Tobias’ couch. I was so happy to trust the internet to take care of me and I had quite the adventure. We walked all over Berlin before the marathon doing 23 miles on Friday and 18 miles on Saturday before the race, but I still ran really well. I also got to meet one of my heroes, Yuki Kawauchi, one of the best runners in the world but he races a lot and still works full time like me. Then I got to visit the US Embassy and that was a definitely highlight to share stories with fellow runners in the diplomatic service and to explore my role as a fitness ambassador for the State Department.” 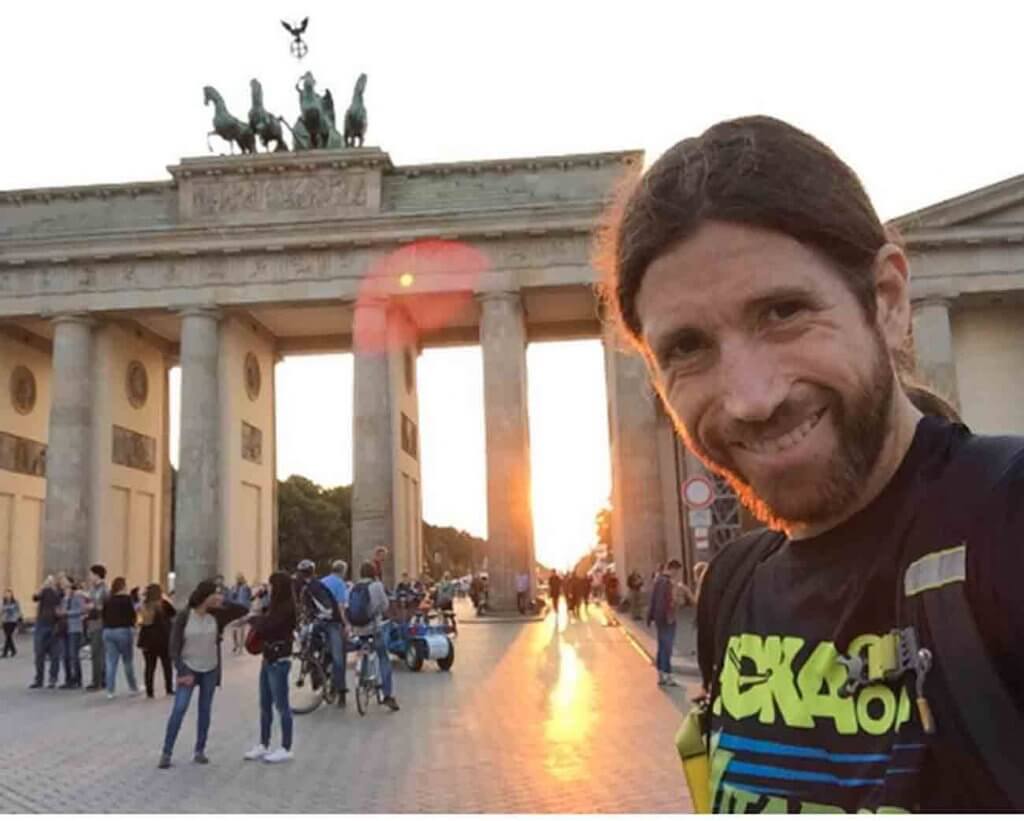 “Chicago is an incredible city and Jennifer, the boys and I hadn’t visited in a while and so we really tried to take advantage of being there. We did a boat tour, learned all about the Cubs, so it was great to see them win the World Series. I also was able to do a really fun podcast called ‘Ten Junk Miles’ live after a group run at Fleet Feet. In addition, I mixed in a little business as we had a client in Chicago so right after the marathon finished I had an 1 hour meeting to discuss food aid.” 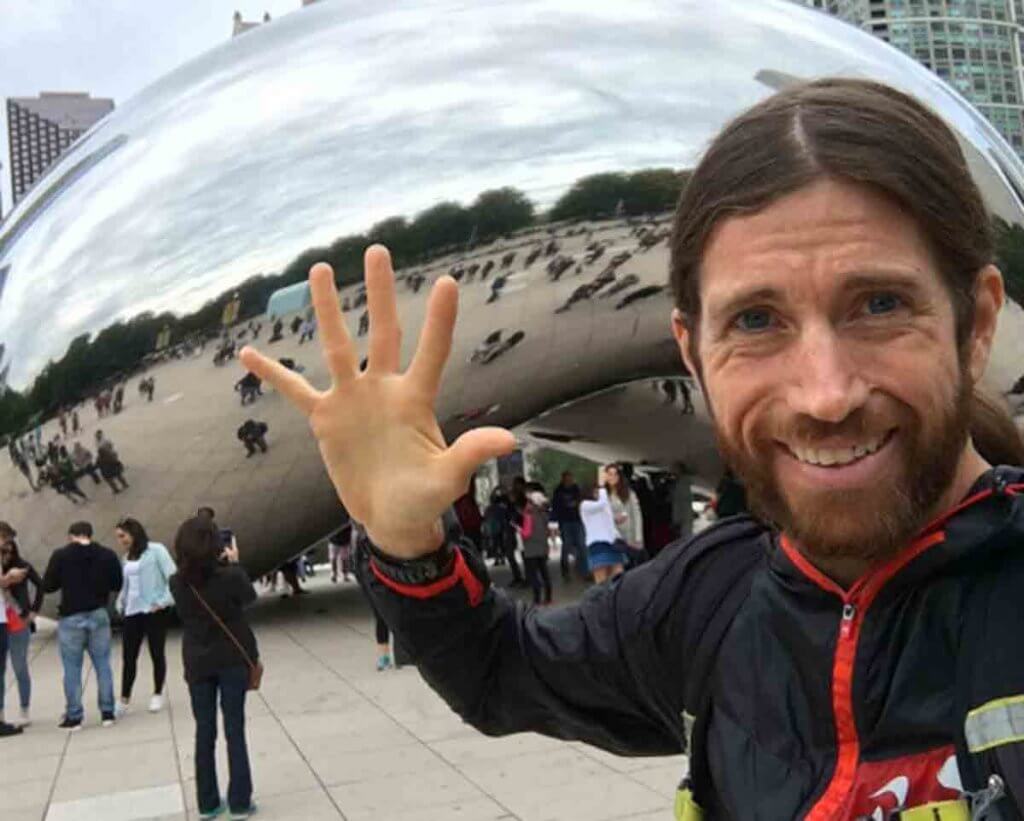 “New York City was super emotional for me as I had been trying to complete the quest to be the fastest person to do all six of the Abbott World Marathon Majors for a number of years. Finally, it was here. I really wanted to make sure I could finish and finish well. I was confident but respectful of the distance. I couldn’t believe what an incredible city it was to run in. What was cool is that I won The Great New York Running Exposition 100 mile in June and it was my first time back in New York. The marathon runs on some of the same streets at the 100 miler and my mind was saying you are at mile 88 and it made my body so tired, but I was only at mile 8 of the marathon. It was crazy. The other memory was visiting the Statue of Liberty with family. We have all been to New York a lot but never visited the Statue of Liberty. It was incredible. We learned so much and now the Statue of Liberty is one of my favorite landmarks. I also was stoked to do two NY Times photo shoots and we had some of the best sushi ever.” 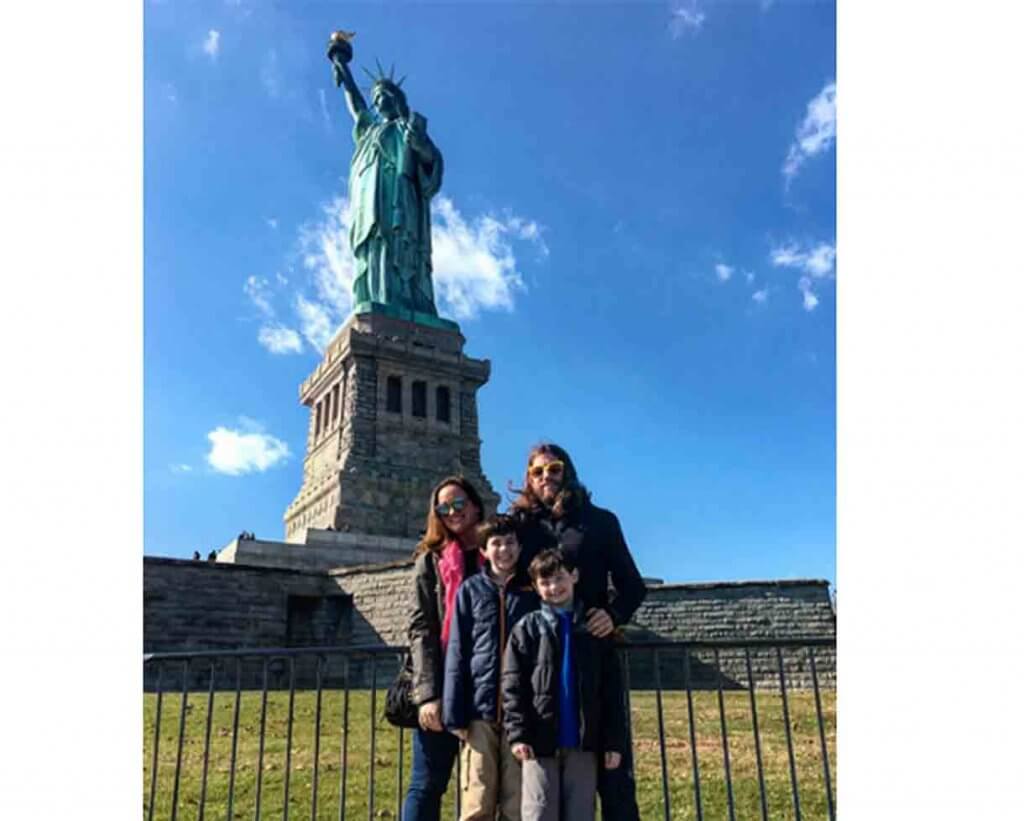 …and then he finished it off with the Elvis Costume Marathon World Record. 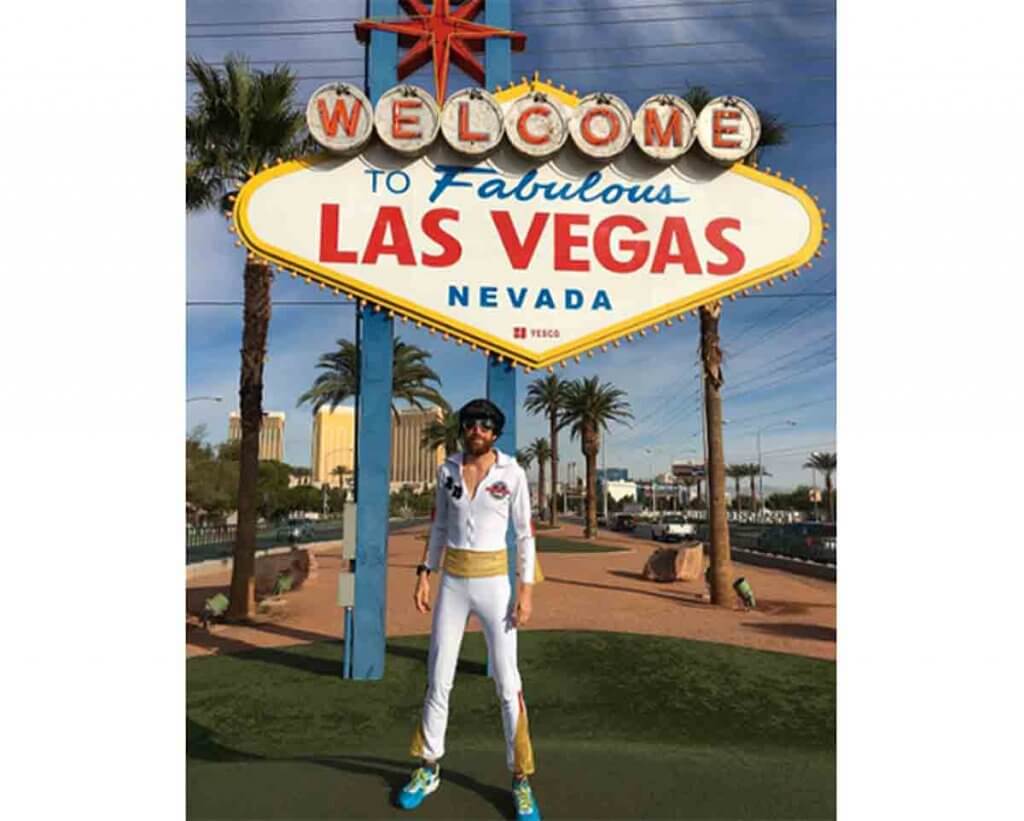 HOKA ONE ONE Athlete Pete Kostelnick wowed the world this summer when he broke the record for the Transcontinental run across America. The grueling 3100 mile run took 42 days. This real life Forrest Gump ran an average of over 70 miles a day in his HOKA Clifton 3s. To put that into perspective, Pete ran over 2.5 marathons a day on his journey. Many elite athletes argue that how you choose to spend your rest time is almost as important as how you choose to spend your practice time. This is a concept Pete took seriously on the road, spending all of his time running or recovering.

We sat down with Pete to learn about his recovery routine and how it was essential to his success. We also got the update on how his body has recovered since he completed his record. 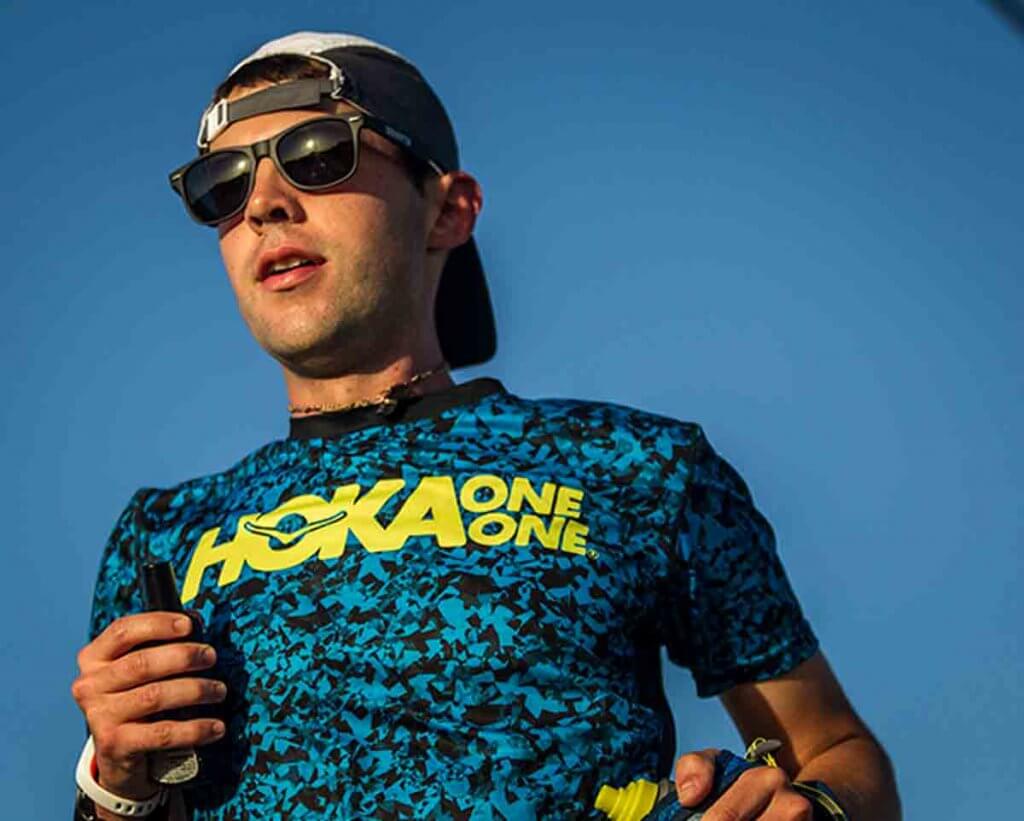 HOKA: What was your recovery routine each day on the road?

Kostelnick: I had an amazing massage therapist, Cinder Wolff, along for the entire run. She also drove the RV and cooked meals. She would do a massage for roughly 15-20 minutes right before I went to bed each night (usually around 6 PM), making sure to pinpoint any areas that were tight, tense, or swollen. It was amazing that I was able to “run through” some ailments, such as a tight hamstring, achy hips, swollen knee, and tendonitis with this approach. Often times we would also ice my shins and calves at night and during lunch break, particularly on warmer days. Cinder also got into a routine of stretching me out first thing in the morning (3:45 am) and just after lunch (usually around 11 am). Nutritionally, I ate A LOT of protein in the form of red meat (to keep my iron up as I have dealt with anemia this year), protein bars, and protein drinks in order to also aide in recovery. 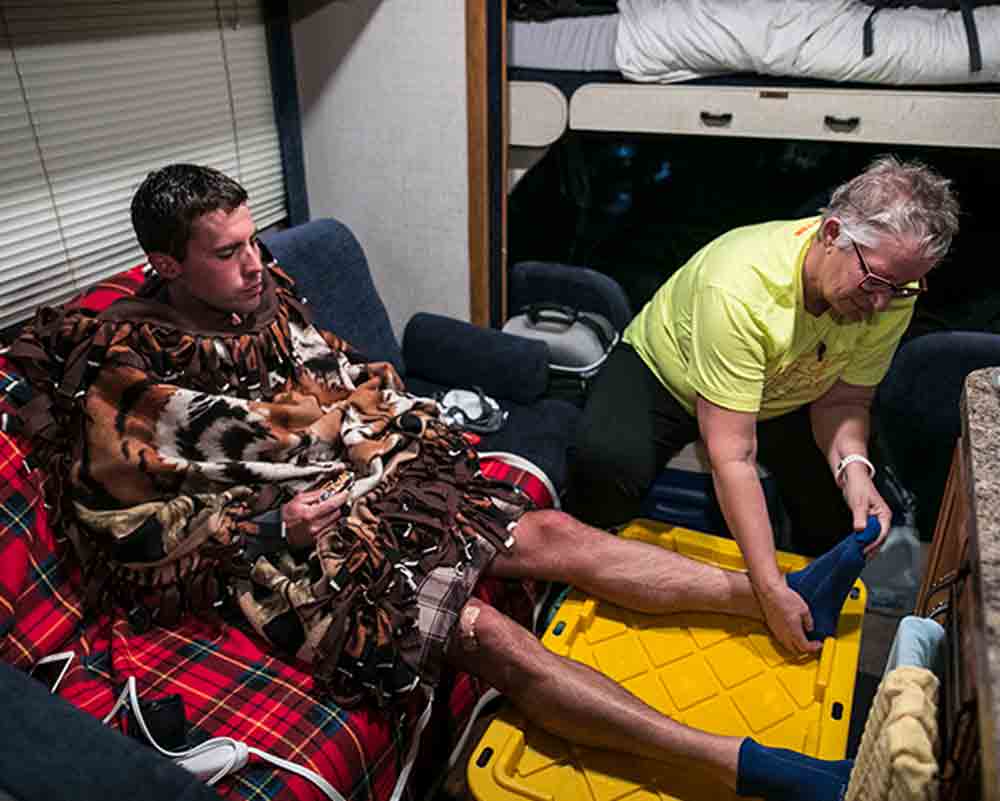 HOKA: How was the process adjusting once you finished your run?

Kostelnick: After the run was over I took four days off completely before doing an easy three mile run on the fifth day. I have since been gradually increasing my mileage to as much as 9 miles in one day, but only 20-30 easy miles of running a week. However, I’ve monitored my daily steps more than anything, trying to get about 15,000-20,000 steps in per day on average. I was taking around 125,000 steps a day during the run across the country, so my estimation is that doing an active recovery in this manner may help me recover quicker. My legs were never sore after the run, and I don’t have any specific aches and pains besides some general swelling and tightness, so range of motion is probably the biggest obstacle.

HOKA: How has your range of motion changed since you finished?

Kostelnick: My legs were pretty swollen from all the miles, so I didn’t have much bend at my knees, which I anticipate will come back over the next couple months. At the pace I was running each day, though, it didn’t really matter. I even had a pretty swollen knee for several days near the end of the run that didn’t really impact my running. 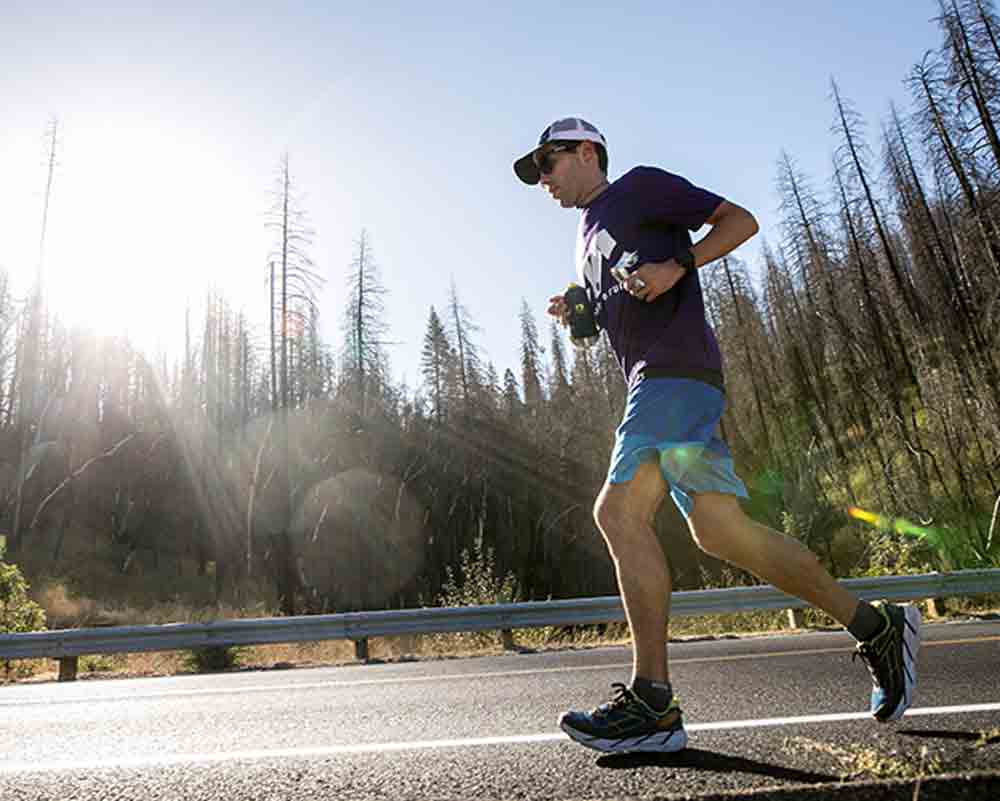 HOKA: How did your body react the first few days when you stopped running so much?

Kostelnick: My body was actually quite a bit more stiff the first few days not running, especially when I sat in a car for 20 hours from New York to Iowa. I was never sore and the swelling has gone down, but now more of a feeling of elderly joints gradually getting younger again. Having the winter to fully recover will be great.

HOKA: What was it like mentally going from running so much every day to not running much?

Kostelnick: It’s been quite an adjustment. I was in such a mode of all I needed to think about was getting dressed, eating, and running, that it caught me a bit off guard to go back to normal day-to-day tasks like driving a car, paying bills, and doing laundry. 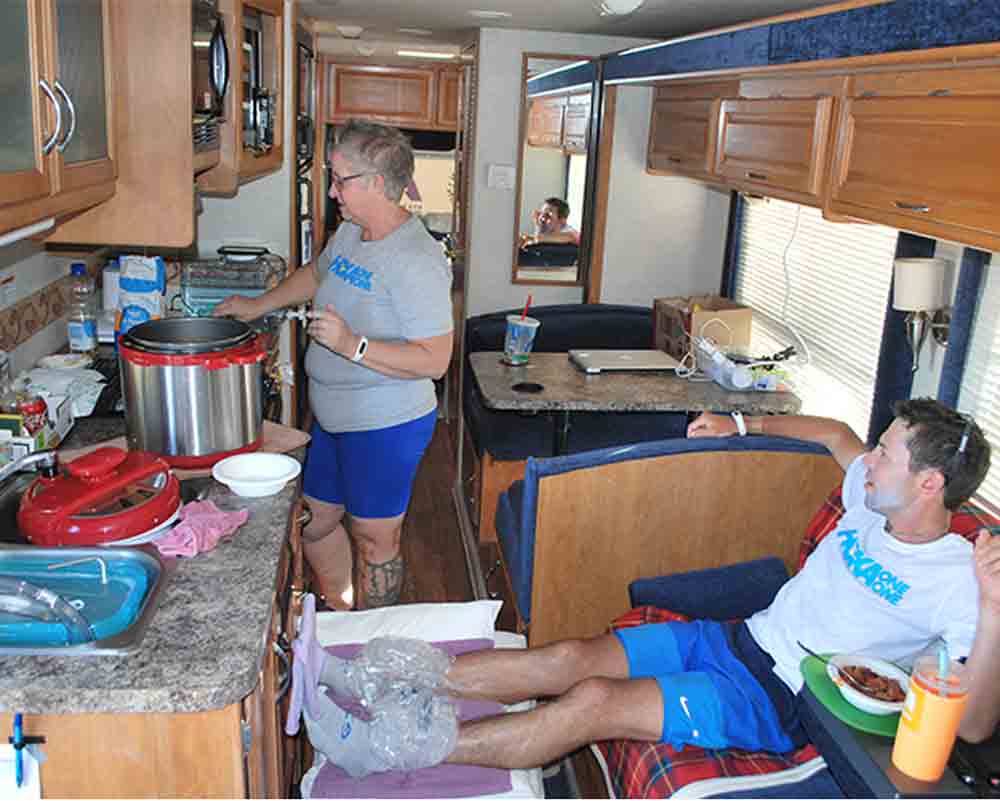 HOKA: How has your life or mindset changed since before you set the record?

Kostelnick: I think I’ve learned to not get overly excited about anything.  In some ways, I had to tell myself at the end of the run to start getting excited to finish, because I had gravitated towards a mindset of not getting too up or down. Sure, I would complain or even yell at times, but internally I had to teach myself to never take anything too seriously or I wouldn’t last mentally. I hope that this run has made me more mature as a runner and even in general. I hope it will also allow me to give back to other runners that gave so much to me in making this run possible. 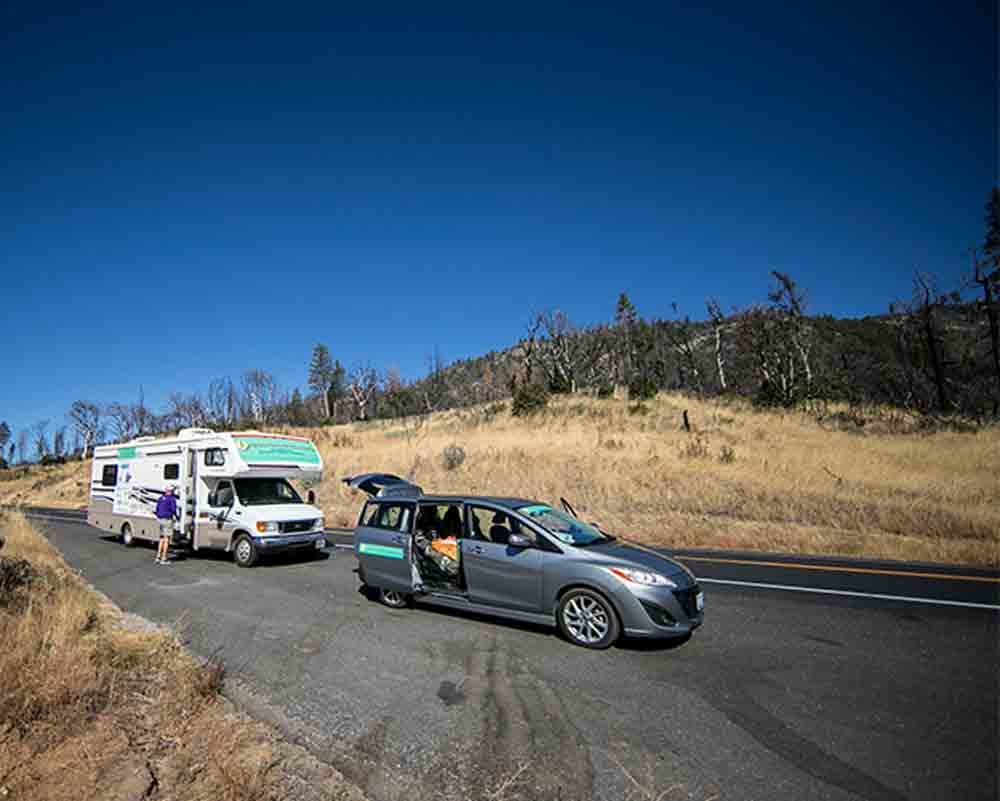 HOKA: Do you have any other big records in mind you would like to attempt to break?

Kostelnick: There are a lot of things I have in the back of my mind that I would like to try. The most immediate is perhaps the American 24 hour record and/or medaling at the World 24 Hour Championships in July 2017.  I will need to add at least nine miles to my 163.68 mile 24 hour performance in December 2015.

The ninth stop for the HOKA ONE ONE Top Trails video series is Washington D.C. HOKA Athlete Mike Wardian leads us through Billy Goat Trail; a gnarly, technical trail in the northern Virginia/Washington D.C. area. Host Matt Barnhart then meets up with Chris Farley (Owner, Pacers Running) to talk about the running community in D.C., which surprisingly has more running clubs than anywhere else in the country. Our hosts end their trip at local favorite, Ser, to chat with Mike Wardian about life as an ultra runner and the opportunity to travel with his family.