Congratulations to Aliphine Tuliamuk for placing first and earning her place on the team this summer.

What’s it like to train for one of the biggest races of your life, knowing that race will be the center of the running universe when it happens, the subject of intense speculation ahead of time, and will pit you against the fastest marathoners in the U.S., all of whom have prepared — like you — to run their absolute best race that day for the chance to represent their country later this summer?

Based on our experience training for just about any race, we imagine it would help if you had friends and teammates to train with — to help push you along and hold you accountable each day in your buildup.

Fortunately for the professional marathoners of HOKA Northern Arizona (NAZ) Elite, the Flagstaff, Arizona-based training group provides just that as they prepare for the chance to wear the U.S.A. jersey in August. To do so, they’ll need to finish top-three at the team Trials in Atlanta February 29.

To highlight their group dynamic, we asked the HOKA NAZ Elite athletes who will be competing to sit down and talk about the race, why it’s significant, and how they’re ensuring they have the best chance to make the team.

Enjoy this HOKA NAZ Elite “group interview,” where they’ll take turns asking each other about their training and their strategy for race day.

What is this race? Why is it a big deal?

I’m Scott Fauble, and I’m going be asking the first question to Steph Bruce. Steph, can you explain this race, and what it’s for? And how is it different than the other Trials race held in June?

Great question Scott. This is the Marathon Trials, and it is basically to determine the U.S. team for the marathon this summer. So in Atlanta, the top three finishers to cross the line make up our U.S. team in the marathon. This is held earlier than the U.S. Track & Field Trials because it is very difficult to run a marathon in June to make the team, and then come back and run another marathon in August. So, they like to have the marathon Trials a few months earlier than the Track & Field Trials. Atlanta got the Marathon Trials this year and it happens to fall on February 29th.

Now I am going to be asking Scott Smith and Kellyn Taylor: what has your training been like? Are you approaching this marathon differently since it’s a hillier course? Does that change your training mentally, physically, and workout-wise?

Atlanta is a very hilly course. There’s not really a whole lot of flat on the course, so we’ve definitely been preparing with a lot of uphills and downhills, trying to avoid really flat surfaces unless we need just a little bit of relief. Outside of that, I think that everything has been pretty similar [to a normal marathon buildup] in regards to mileage and effort. Maybe a little more intense than some prior segments, but that’s the Trials for you.

Yeah, I think we are approaching it a little differently in terms of not putting any sort of time expectation on the course or the race for a couple reasons. First, time is pretty irrelevant when you’re racing for place and it doesn’t really matter what your time is as long as you end up on that podium and you earn a spot on the U.S. team. Second, [this] has been different from some approaches in the past. For example: the last marathon we were in was Chicago, so we were doing a lot of very specific pacing since that’s a flat fast course to try and get very efficient at a certain pace that I wanted to sustain for 26.2 miles. Whereas in Atlanta, that’s really not the case, so a lot of the training hasn’t necessarily been being married to splits on the watch; it’s just been getting on, like Kellyn mentioned, difficult terrain, and learning how to run efficiently up and down hills versus running with a very certain pace.

What is your goal at the race?

The next question I have is for Aliphine and Scott Fauble. What are your goals, and do you have any predictions about this upcoming race?

My goal is to win the race and I predict that I will do it.

My goal, I know it might sound lofty, but my goal is to make the U.S. team. I read an article about Scott [Fauble] & Ben [Rosario, HOKA NAZ Elite coach] the other day and I know you said your goal should be to win the race, not to just make the team, but I’m going to say to make the team. That means I am going to try to win, number one, and if I really fall short I definitely want to be in the top three. And my prediction? I think I’m going to do it, just like Scott said.

This one’s for Sid Vaughn and Stephanie Bruce. Are the shoes you’re training in different from the shoes you’ll be racing in and how so?

I do a lot of my easy and recovery runs in the Cliftons. We’re currently running in the Clifton 6. Then I do a lot of my workouts and races in the EVO Carbon Rocket, and I’ve been racing in them since about 2018. Just recently we’ve been trying out the Rocket X, and I’ve like them so far, so if things point towards that direction, I will most likely run the marathon in the Rocket X.

Yeah, very similar to Steph: I train my easy runs in the Clifton 6 or the Bondi 6, and for workouts and races I’ve used the Carbon X in the past. But like Steph said, we just got the Rocket X and it has been my favorite flat so far, so I’ll probably be racing in that one. 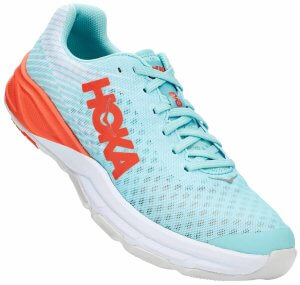 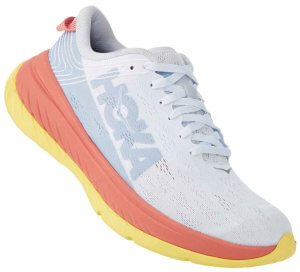 Good luck to our HOKA NAZ Elite athletes racing in Atlanta on February 29! Follow @hokaoneone on Instagram and Twitter for updates on race day. It’s Time to Fly™.