The relationship with ourselves, including our bodies, is the most important one we will ever have. It’s our vehicle for living life and a part of who we are. That’s why learning to treat it with respect and celebrating its strengths is imperative. Today, Logan Russell (a.k.a. “Lolo”) is sharing her mission in changing our relationship with food and fitness. Lolo is a blogger HOKA was originally introduced to through our partnership with Zappos. She is a body love advocate based out of Charlotte, North Carolina who strives to inspire women to embrace their bodies and celebrate their personal style. To learn more about her journey, check out her blog LoloRussell.com or find her on Instagram @lolo_russell.

Everyone has their own agenda going into a workout: to push our body to the next level, maintain our health, or maybe we need that blissful release of endorphins. Fitness, especially running, has the power to completely transform our bodies and minds. It’s an opportunity to do something good for ourselves both physically, mentally and emotionally.

Unfortunately for many of us, especially this time of year, exercise becomes a form of punishment rather than a positive experience. Instead of lacing up our shoes with the intention of doing something good for ourselves we walk into a workout focused on how many calories we need to burn to compensate for last night’s dessert, the distance we will push to earn a meal or hours needed to make our goal weight. It’s a toxic pattern that must be stopped: it’s time we change the narrative surrounding fitness from punishment to empowerment. 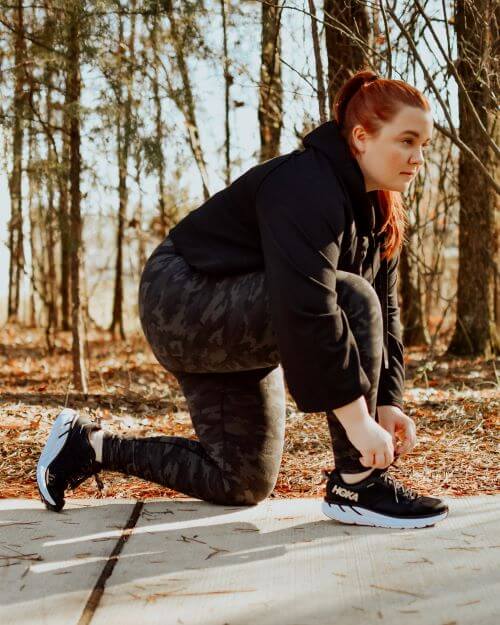 We’ve all fallen prey to the winter binge-regret routine at some point in our lives. As someone who has recovered from an eating disorder, I know this story all too well. Many of us indulge in sweets and lavish meals during the holidays only to spend the first part of the new year punishing ourselves for enjoying the season. This cycle ends up setting the tone for our relationship with food and fitness. In each month that follows as we choose to eat a simple treat, like a perfectly flaky butter croissant or a slice of pizza, and we think something along the lines of “I’ll need to run later to work this off.” What’s the point of doing something if you’re just going to punish yourself later? Are you really going to reap the full benefit of your workout if you’re busy beating yourself up? Life is too short to miss out on the joys of this world. That includes both pizza and running! 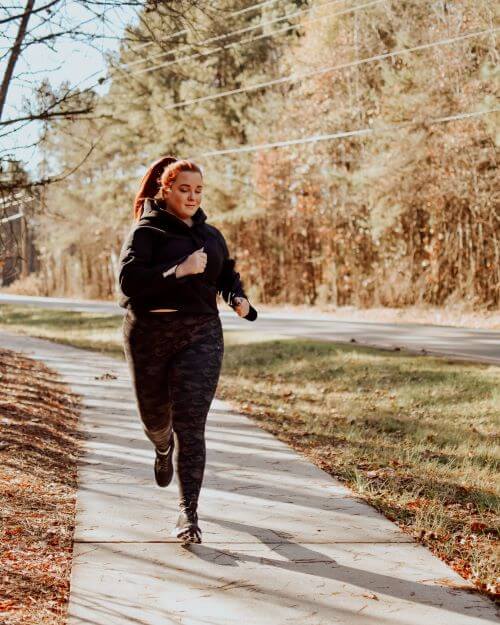 Let’s work on shifting that inner dialogue. Every time we choose to move our bodies with the intention to serve them we are honoring ourselves. It is a moment to embrace the life we have, block out everything else in this world to focus on us and come out the other side of it a better version than we went in (albeit more sweaty, tired and maybe a little sore). Sure, it isn’t always easy. There are days where the thought of running one more mile makes me want to crawl back in bed! But nothing truly worth having ever comes easy, right? We have to work for it. That includes choosing to work toward a more positive mindset with our workouts.

This is the resolution I want you to keep this year: enjoy food that serves your body and soul, let it fuel fitness that does the same. When you choose to indulge change the internal dialogue from “I’m going to regret this” to “I’m going to enjoy every moment.” When you step out for your run don’t think “I’m working off all this weight.” Instead, remind yourself “I am strong, I am capable, I am celebrating my body.” 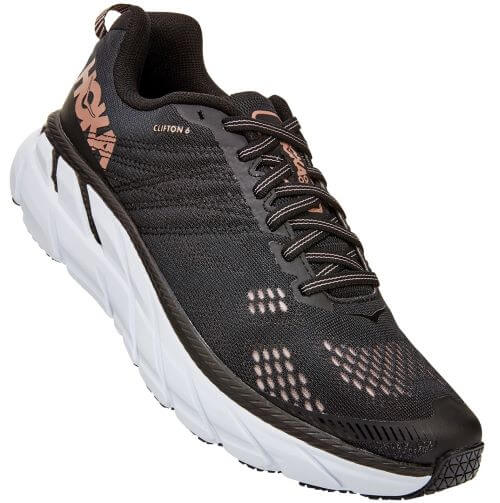 Imagine taking your morning run and turning it into your new commute, everywhere! We sat down with Seattle-based run commuters, Dani Kruger and Ashley Davies, to discuss how running has inspired them to reimagine their daily routines.

HOKA: How did you begin run commuting?

Dani: The first step for me was finding out what I NEEDED to run with and how I’d carry it. I figured out I could bike to work on Monday morning, run home – leaving my laptop and bike at the office – run back Tuesday morning, and then bike home Tuesday night. With a 4-5 mile commute, one way commutes were effective at making sure I ran every day while not adding more daily mileage than I was ready for. I bought a hydration pack – which was great because it eliminated bounce – took out the water bladder and filled it with a change of clothes I could put on when I got to the office.

Once I started running to work, I realized that run commuting could mean running anywhere I needed to go.

Ashley: I moved to Seattle from NYC four and a half years ago where I did not have a car. I would run commute and take the subway. Getting around by foot was often quicker than getting around via car or other forms of transportation and it was also an efficient way to be able to get my miles in. When I first moved to Seattle, I was run commuting just about everywhere if I didn’t have a heavy load to travel with. It was a great way to see the city, and I often found myself in a better mood from the additional exercise. 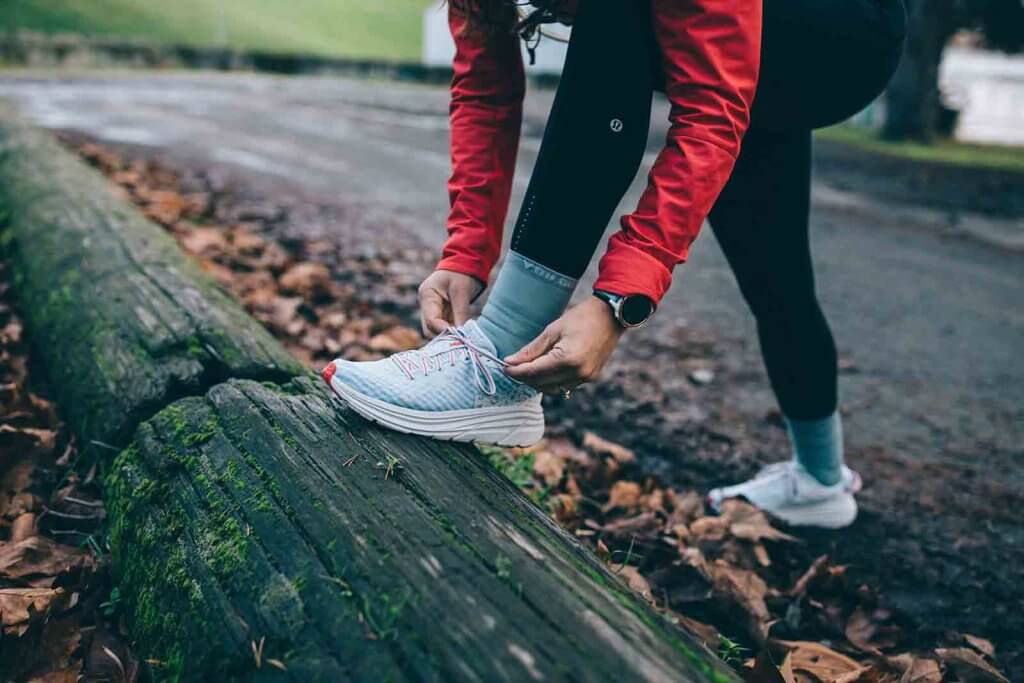 HOKA: Where do you currently run commute?

Dani: I run commute to my morning workout, to a friends for dinner every Sunday, to meet friends at a bar/coffee shop, and on light errands like to the drugstore to buy donuts in the morning for breakfast on a Sunday, etc.  I also run commute a TON when I travel. I find it to be the best way to see a city and get to know it really quickly, without trying to figure out public transit. We were in Vancouver this summer and they don’t have Uber or Lyft so I ran commute to get EVERYWHERE!

Ashley: I almost always run commute to teach my fitness classes. It gets me warmed up before I teach! I teach classes before and after work during the week and in the morning on the weekends. 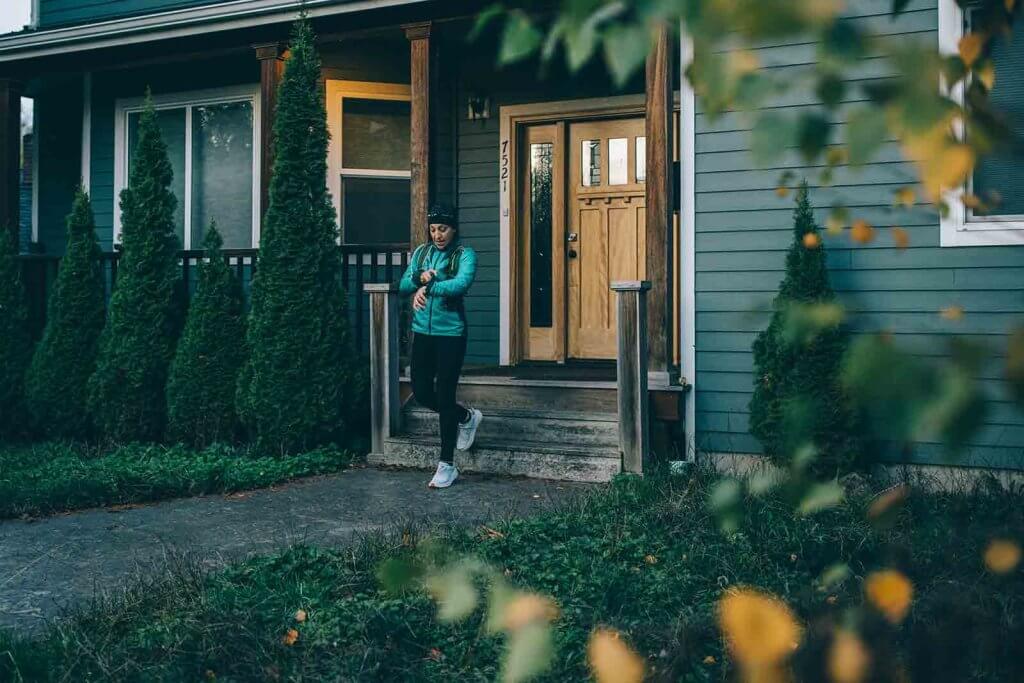 HOKA: What are some of the main obstacles you face as a run commuter and how do you overcome them?

Dani: Weather impacts my run commute way less than it did when I bike commuted! I have a really good raincoat that keeps my body dry and will wear clear lens “sunglasses” if it’s dark but raining to keep the water out of my eyes. If it’s cold, I add gloves, a hat, and a buff around my neck and then add on clothing layers as needed. You always need less than you expect because running warm up your body so much! If the ground is snowy or icy, I’ll run in trail shoes to help find more stable footing.  If it’s dark, I wear a headlamp and a light up vest so I can be easily seen and see where I’m going – Seattle is so dark!

Ashley: Not practical when you have a lot of stuff to travel with. You either go alone or with friends, which can be hard to find friends to run commute. Given the limited daylight in the winter, run commuting is not the safest option.

Dani: Seattle is super dense which makes most destinations runnable in a short distance. It’s also SO hilly. Although that seems somewhat counter intuitive, it’s actually more enjoyable to run (or walk) the steepest hills than struggle up on your bike. The weather is also perfect for run commuting. The rain makes biking a lot less fun as it blows in your eyes, rusts your chain, etc. but the rain is so light that running in it is no big deal. It’s also relatively warm in winter and not as humid in summer (compared to living in Chicago) so you don’t have to worry about icy sidewalks or getting too sweaty.

Ashley: Seattle is all connected in a runner accessible way. With the quick growth in the city, there is a lot of traffic at different points in the day, so run commuting can be faster and a lot less stressful than using other forms of transportation. Seattle is such a beautiful city. I believe running through our beautiful city stimulates my happy neurons. 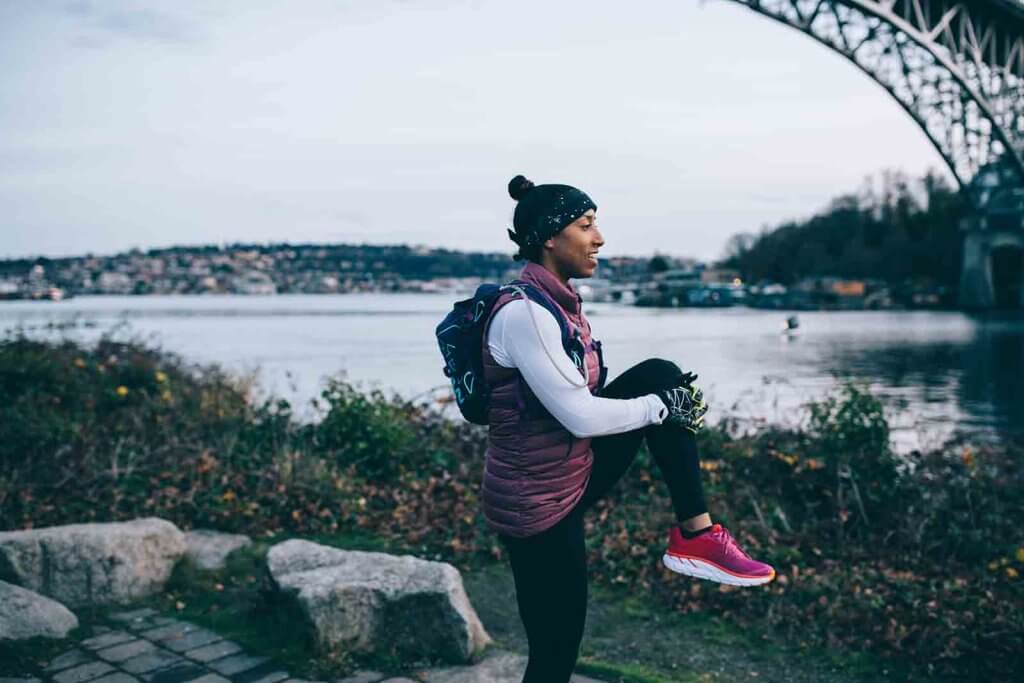 HOKA: What tips do you have for someone who is interested in getting into run commuting?

Dani: Start by finding ways to make your pack light and immobile. A pack that doesn’t jiggle means you’ll barely feel it when you run. If you can figure out a way to leave things at work (company policy allows me to leave my computer in a locked drawer overnight, for example), you can lighten your load and make run commuting more feasible.

Look into shower options. Many big buildings have showers for bike commuters – ask if there’s a way to shower there without paying for a bike-spot.  In big cities, chain gyms can also be a great place to shower because they’re likely to have a location near your office. Many insurance plans like Blue Cross let you join LA Fitness and similar gyms for $25/mo through their wellness program – worth it even if you only ever use their shower, based on what you’ll save in public transit or parking/gas costs. If you really don’t have access to a shower, try showering BEFORE your run commute, and then immediately wiping your sweat dry and changing your clothes when you arrive at work. Most of the bad smell from sweat is actually dirt and grime on our bodies released when we sweat. If you’re clean when you start to sweat, it doesn’t really smell at all and no one will even notice!
Ashley: I’d suggest mapping out the route on google maps, or walking / driving through the route just to make sure you have a safe running path and won’t get lost. You wouldn’t want a 3-mile run commute to turn into a 10 mile run commute because you got lost.

Shop the Clifton 6 HERE and the Rincon HERE. 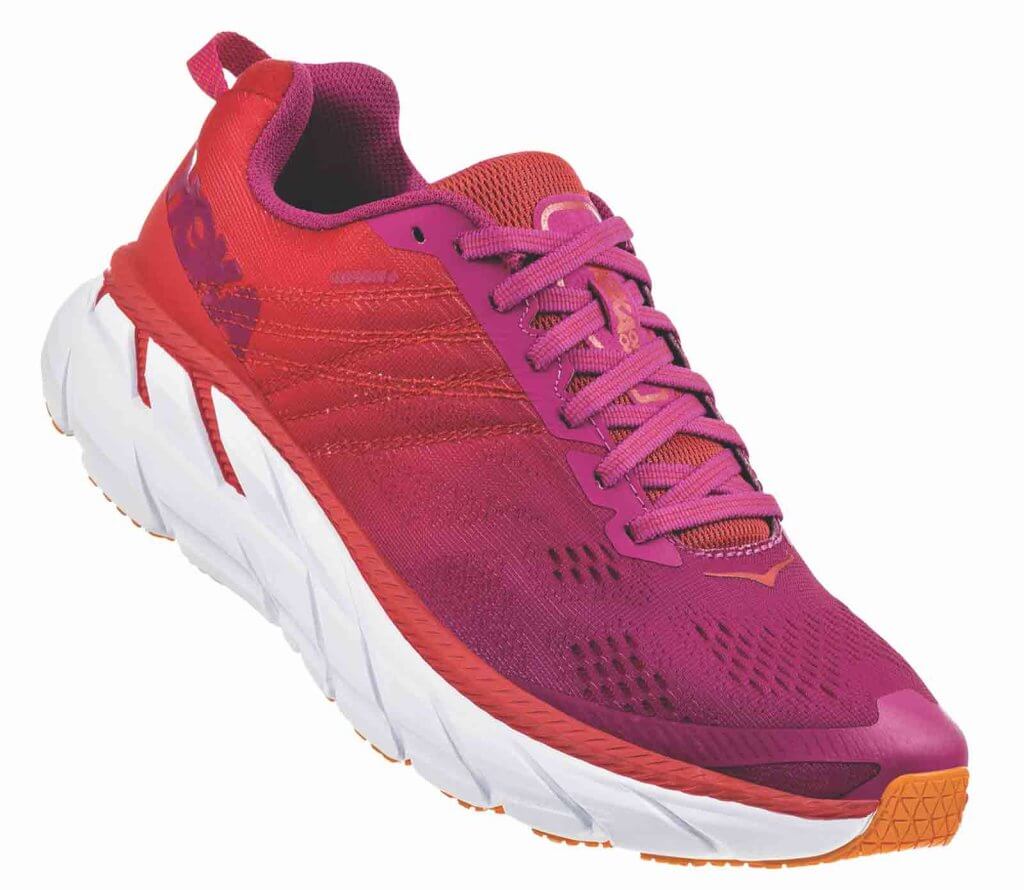 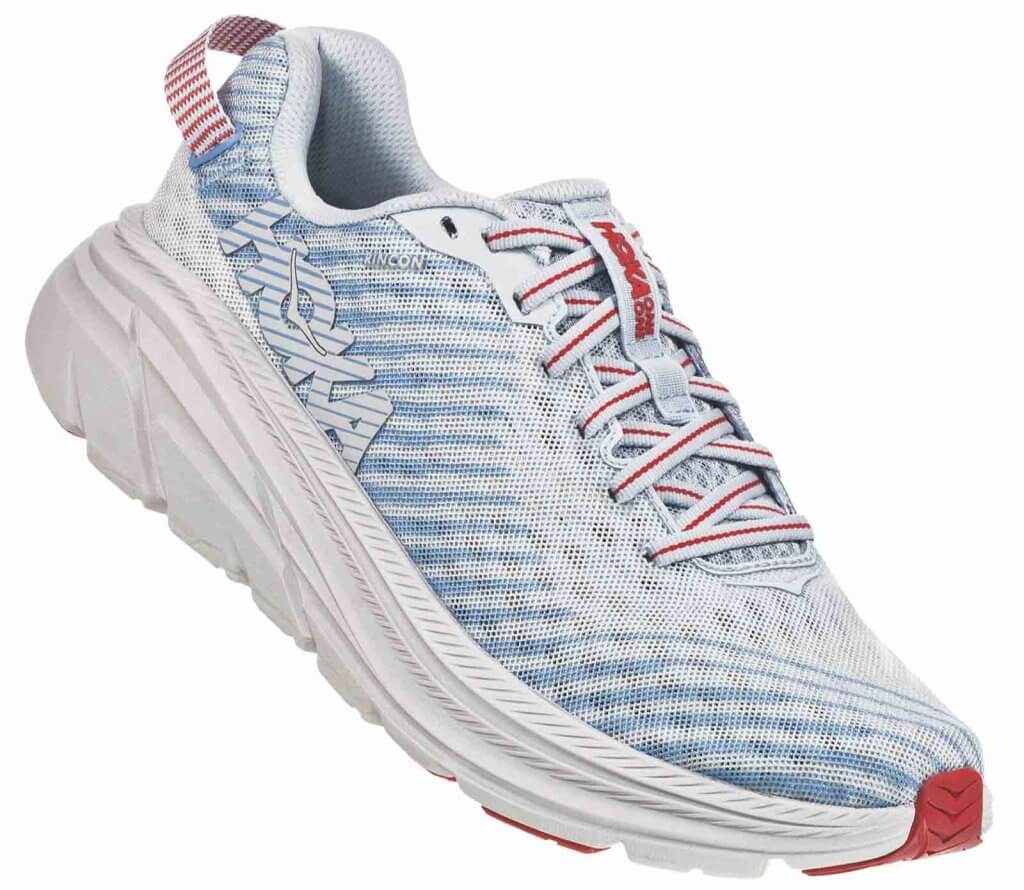