“The more I ran, the more confident I became. Running races once felt nearly impossible for me, but with every finish, it felt like I could do anything if I really set my mind to it. That feeling spilled into every aspect of my life.”

Annya Santana is a New York native and creator of gender-fluid wellness brand, Menos Mas. She has a vision to bring natural wellness products to people of all backgrounds based on the idea that “less is more,” which is the loose translation of her brand’s name. Annya exudes confidence — she is a smart businesswoman with a disruptive vision, a committed athlete and an intuitive creative with the natural drive it takes to make it in a big city. However, Annya struggled with self-doubt before her career and running goals felt attainable.

Annya was born and raised in the Bronx. She says coming from New York is essential to who she is. “There’s a fearlessness when you grow up in NYC that lets you dream the impossible. Growing up in this city prepares you for life. This city has shaped the way I dream, the way I work and the way I execute,” she says.

Annya’s city-bred grit led to her follow her dreams to a new city. She loved the hustle of New York but yearned for the French way of life. Yet, moving to Paris wasn’t her only bold goal.

“The summer I decided to move to Paris was also the same moment I decided I would turn my skincare and wellness life into a business. In retrospect, moving to a foreign country and launching a business from there wasn’t exactly the easiest positioning, but I was extremely motivated and determined to make it work,” she says.

Only in her mid-twenties, Annya realized the difficulties of moving to a foreign country when she arrived. “I didn’t have a place to live and I didn’t speak French,” she says, “I didn’t even know anyone.”

For Annya, fear and loneliness were incredibly painful to overcome. “It was in those very painfully challenging moments that I discovered myself,” she says, “I faced myself, my fears and my insecurities. I discovered my tenacity for this life and what it means to never quit.“

Through this unique journey, Annya realized the value of embracing discomfort as an opportunity for growth. Even as an athlete, running was something Annya always struggled with. “Running is the hardest sport on the planet. At least to me it is,” she says, “You can’t pass the ball, sit it out or get subbed in. There’s no teammate to pick up your shortcomings. It’s just you. When I say you, I mean all of you — mind, body and spirit.”

While living in New York, Annya gave running a shot. She even ran her first marathon but still considered quitting. “I was constantly putting myself down about making progress. It took everything I had, and I didn’t feel good enough to keep at it,” she says.

It wasn’t until Annya changed her perspective on running that she was able to love it.

“Living in Paris would be nearly impossible without my running community. Running culture literally  saved me in a foreign place and has given me friendships, a home and community like I have never experienced,” she says.

Annya used her newfound love of running and took a leap to join the Speed Project, a 344-mile relay race from Los Angeles, CA to Las Vegas, NV.

“At one point, some of the girls on my team were feeling really defeated about their performance. I felt this strong urge to speak up. I took the reigns and just let everyone know that whether you finish first or last, we all get the same prize — the reward of finishing this grueling race. Trying to uplift others kind of made me lift myself up as well. In that moment, I finally realized I am a runner,” she says.

For Annya, it’s no coincidence that her achievements in her career aligned with her new identity as a runner. Pushing her physical limits taught her to overcome the challenges that came with starting a business.

“Running has allowed me to tackle life. It’s hard, but it’s equally rewarding. I was out there fighting every negative thought and mental barrier. I felt defeated by the elements, but instead of quitting, I pushed past the pain, held on a little longer and finished,” she says, “I felt unstoppable. I fought against all those obstacles in my mind screaming for me to stop, and I accomplished what felt never-ending. Breaking those mental roadblocks changed me.”

Now living between New York and Paris, Annya continues to focus on her running and her business. She has big goals for the growth of her business and now has the confidence to do what it takes to succeed.

“I have the power of believing in myself, speaking things into existence and working hard so that when the opportunities present themselves, I am prepared. I am creating a life I feel good about. It feels like it’s all coming full circle even though I am nowhere near where I want to be,” she says, “I feel gratitude every single day because sometimes I still can’t believe that I am doing exactly what I dreamed of.”

Shop the HOKA Cavu from our reflective Fly at Night collection. 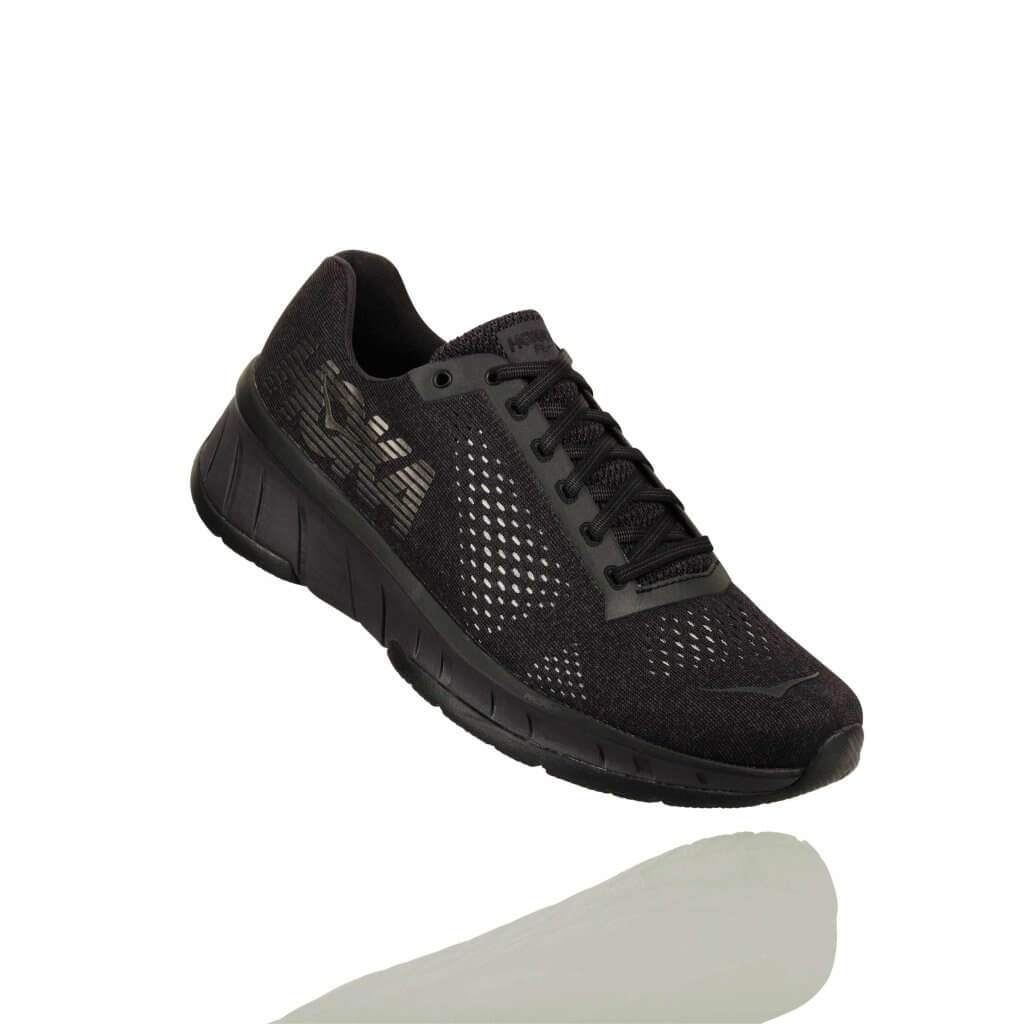 “I had always said I’d never do a marathon, and it really just taught me never to say never,” says Victoria Tomkinson.

Victoria Tomkinson always dreamed about living in a big city. Today, she is living out that dream in New York City, where she works as a social media editor curating digital platforms for trendsetting brands and media outlets.

Not only has Victoria proven herself as a bold career woman in a competitive city, she has also created initiatives to use her media platforms as a source of empowerment for women in sports.

Taking action is important to Victoria because she didn’t always see herself as a runner and she wants more women to know their own strength. We spoke with Victoria to find out how she finds balance in the city that never sleeps and how she has learned to embrace risk by “never saying never.”

“It was a time of massive change for me. I felt like I had really taken a leap of faith, but it was 100% worth it,” says Victoria Tomkinson. “I’ve never been a fast runner and because of that I thought I’d never be a runner.”

After she ran her first half marathon, Victoria changed her mind. Running was now part of her identity.

“I think not being able to stay away from the challenge and actually enjoying the training has made me secure that no matter how fast, I’m definitely a runner,” she says.

As a runner and triathlete, Victoria hopes to encourage more women to see themselves as athletes and find the enjoyment and pride she has found in her sports.

“That moment when you settle into a run and are really feeling your groove is like nothing else. I think both mentally and emotionally, running is such a space that I can take for myself. Every improvement or goal met makes me feel accomplished, proud and strong,” she says. “I hope to inspire women to consider sport as a part of their everyday lives.”

Victoria also does her part to make sure female athletes are equally represented in the media. “There are so many incredible female athletes out there, and yet we only hear about such a small portion of them.” she says. “The conversation is growing, and I hope that it continues to gain more and more momentum.”

Victoria candidly documents the highs and lows of training on her own social platforms to show the process of training while maintaining a demanding career. She believes that any woman can be a triathlete if they set goals and make it a priority.  She’s also no stranger to training during early mornings or late at night.

“It’s a massive balancing act. Obviously, things come up. Sometimes I oversleep or I slip out for a happy hour, but I definitely prioritize it. I try to make sure that I’m getting early mornings or long Sunday afternoons in. But, I’m definitely guilty of being at the gym at close when I’ve pushed back my workout,” she says.

One opportunity that committed Victoria’s training to the next level was an unexpected opportunity to run her first marathon.

“It was a bit spur of the moment, but I actually ended up running the New York City Marathon. I’d just finished my last triathlon of the season and was getting ready to take a step back in training. I got the opportunity to snag a spot in the race two months before it was taking place. I kind of did it on a whim and instantly had to kick running into full gear,” she says.

Victoria’s risk paid off. After just two months of training, she finished the New York City Marathon and learned an important lesson. “I learned that I’m stronger than I think I am. I learned that even when it feels impossible, putting in the time and the work will pay off,” she says.

She hopes can inspire more women to try something that feels out of reach, even if it’s not a spontaneous marathon.

Shop the HOKA Mach from our reflective Fly at Night collection. 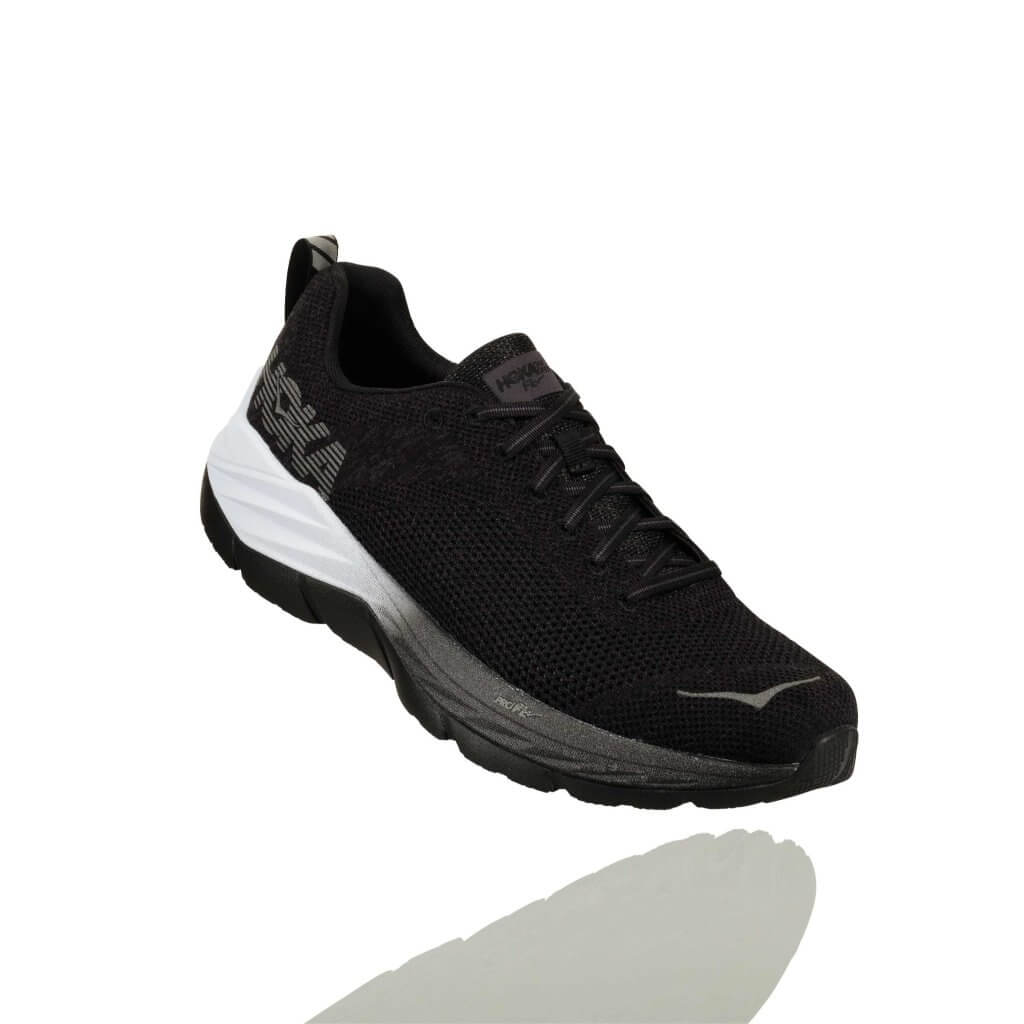